Based on a live performance called “The Glass Concert” given periodically between 1968 and 1973 (76 times, to be exact), Annea Lockwood’s 1973 LP The Glass World is the composer’s most recognized work. The original performances took place in the dark, with most of the sounds being produced offstage and amplified into the concert space. On-stage antics included “curtains of fine glass tubing; trees of bottles inverted in a spiral pattern; a mobile of large panes of wired glass, surrounded by mirrors.”
– Dusted Magazine

Many types, shapes and sizes of glass were used in performances of the Glass World. The glass used was not specially prepared or shaped. Rather, pieces of glass which are not normally seen were played, including the four sound sources heard in this excerpt: A large sheet of wired glass, small glass discs which are rubbed together, chunks of green glass cullet (like rocks) which are moving against one another, sheets of micro-glass shaken or popped. My intention was to present each sound as if it were a piece of music in itself. For me every sound has its own minute form – is composed of small flashing rhythms, shifting tones, has momentum, lives out its own structure, and since we are used to hearing sounds together, either juxtaposed, blended or compared, one sound alone seems simple – but so are the round scuffed stones lying about everywhere, until you crack one apart and all its intricate beauty takes you by surprise.
– The Wire

“What I really relish is the unexpected sounds which emerge from making the same action with the same materials.”
– Annea Lockwood 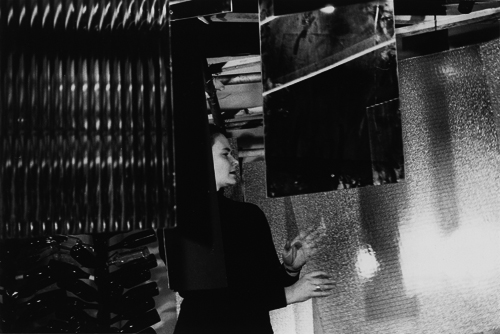 Why did you begin working with glass? What was your intention with The Glass Concert series?

I turned to glass because it was an unfamiliar medium. I wanted to entice people into really listening intensively and move them past the process of, “Ah, that’s what’s making that sound. OK, so what’s going to happen next?” and into really listening. [I wanted] a deep immersion in the sounds themselves, for the audience.