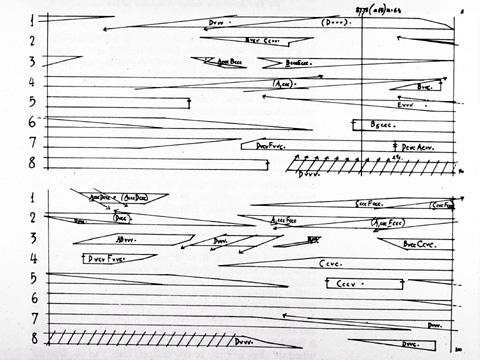 This is a work for eight tracks of 1/4” magnetic tape. The score is a pattern for the cutting and splicing of sounds recorded on tape. Its rhythmic structure is 5-6-16-3-11-5. Sounds fall into 6 categories: A (city sounds), B (country sounds), C (electronic sounds), D (manually produced sounds), E (wind produced sounds), and F (“small” sounds, requiring amplification). Pitch, timbre, and loudness are notated as well. Approximately 600 recordings are necessary to make a version of this piece. The compositional means were I Ching chance operations. Cage made a realization of the work in 1952/53 (starting in May 1952) with the assistance of Earle Brown, Louis and Bebe Barron, David Tudor, Ben Johnston, and others, but it also possible to create other versions. The most elaborate realizations in recent years have been undertaken by Larry Austin.