The first thought that came to my mind was ‘cool stairs’. I vividly remember trying to design a cool stair when I was designing my project for Bridge 4. Therefore, I googled ‘cool stairs’ and came across the stairs installed in Shanghai Grand Opera. This particular stair had caught my mind because although it is simple, it appears to be moving, which I think is the perfect stair for a performing arts place. With this idea in mind, I start finding out the architect behind this invention and through that, I have found Jean-Marie Charpentier, a French architect. 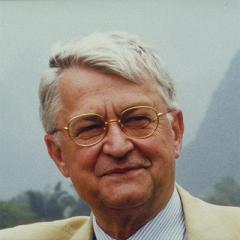 Jean-Marie Charpentier graduated in urbanism at the University of Paris in 1966, and at the École nationale supérieure des beaux-arts in 1969. He taught architecture in Cambodia for a year, before founding Arte Charpentier in Paris in 1969. Arte stands for Architecture, Research, Technique and Environment. The agency comprises four practices: urban planning & design, landscape design, architecture, interior design.

In 1984, Jean-Marie Charpentier is one of the first European architects to settle in China.

ARTE Charpentier, who today employs an antenna of around thirty collaborators, has signed in the port city the masterpiece of the Shanghai Opera (1998), but also part of the pedestrian artery of Nanjing Street ( 1999), the Avenue du Siècle (2000), the headquarters of General Motors (2004), and more recently the R & D center of Saint-Gobain (2007). “The Middle Kingdom is as big as Europe and we have focused our efforts on this country by intervening, after the cities of the coast, on other big cities in the interior of the country, which have become real metropolises. “, explained last June Jean-Marie Charpentier. Like the bold history museum of Ala’er City (Xinjiang Province),

Closer to home are the recent commercial buildings produced in France, the headquarters of Dassault Systèmes in Vélizy (2008), or the astonishing Elithis positive energy tower, inaugurated in Dijon in the spring of 2009. Still sustainable development: this year, the twenty-eight floors of the emblematic Lyon skyscraper of the Oxygène tower reinvent the urbanism of the Part-Dieu district on 115 meters of height.