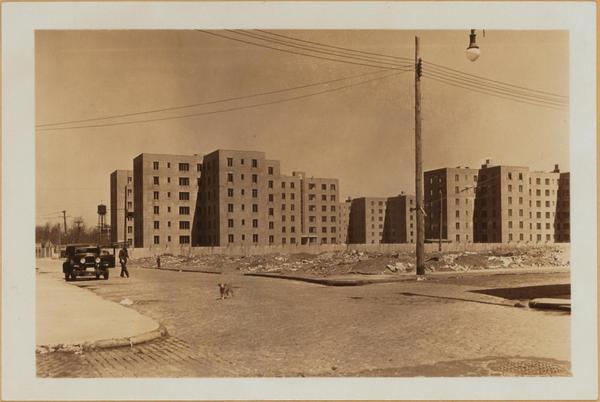 Pictured above is a picture of Red Hook Houses,a housing center sponsored by the New York City Housing Authority. During the 1930s while the United States was facing the Great Depression, Red Hook was the site of a Hooverville. This picture shows how Red Hook’s history of low-income affordable housing dates back to the Depression era. Besides the public housing for many homeless and industrial buildings, Red Hook was relatively undeveloped as there is an empty lot shown in front of the Red Hook Houses in this picture. The streets are empty except for a dog in the middle of the cobblestone road and a man standing next to his car. As a somewhat desolate area, the question of who travels to Red Hook is posed, as well as what sense of community Red Hook had in the past. 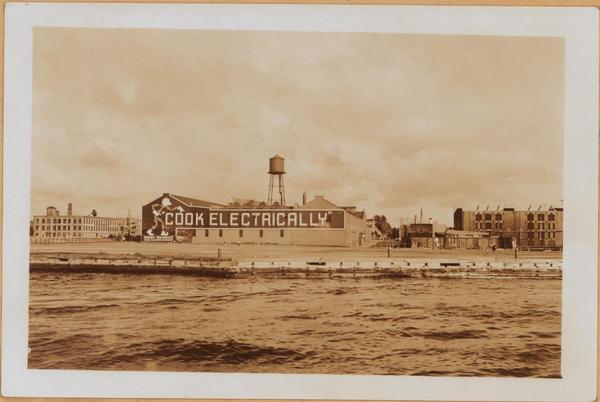 Pictured above is a Brooklyn Edison Company Building with the slogan, “Cook Electrically” on the rear. In the foreground of the picture is the Buttermilk Channel. Red Hook, as a peninsula surrounded by the Buttermilk Channel, Gowanus Canal, and Gowanus Bay, has a history of being a port city. Though this particular building no longer stands today, Red Hook is still very much so connected with its industrial past, with desolate industrial buildings and areas still remaining. There is a question if Red Hook’s reputation of being a port city has affected immigration into Red Hook or what inhabitants had a relation to nautical jobs due to its location. Red Hook’s geographical location combined with its vast public housing poses the question of what ethnicities lived there, especially in the 1930s.
Link: https://www.oldnyc.org/#704170f-a

The people pictured in this photograph of Red Hook’s Recreation Area in 1938 are without a doubt significantly less diverse than Red Hook’s population today–the people pictured here are all white. During the 1930s, segregation was still alive and well in the United States and this is the reason why no colored people are shown in this picture since they were not allowed to use the public swimming pool. Though a public space, it was not publically available for everyone. Are these people all residents of Red Hook? Who was allowed to use this public space? If these people were residents of Red Hook, did some live in the Red Hook Houses? What were the interactions amongst the people of Red Hook like and who interacted with each other? The Red Hook Recreation Area still exists today, though with many renovations and of course, change in diversity of visitors and inhabitants.
Link: http://nycma.lunaimaging.com/luna/servlet/detail/RECORDSPHOTOUNITARC~35~35~1435416~143647:dpr_14933?qvq=q:red%20hook&mi=15&trs=85