I found this photo on Pinterest by searching about Loie fuller, which was one of the dances that were attracted to the fashion industry after the rise of photography in the late 19 century.

Loie Fuller was an American actress and dancer that was known with her techniques of lighting and modern dance. Born in the Chicago suburb of Fullersburg, Fuller started her career as a skirt dancer at burlesque .

Working through several years, she had become one of the pioneers in free dance practice,  she created a dance named Serpentine Dance. Ideal image of her famous dance her silk costumes that were illuminated by multi-colored lighting of her own design.

samples of her works and costumes

Georges de Feure was a French painter, theatrical designer, and industrial art designer in the symbolism and Art Nouveau styles during the early 19 century. As an artist, De Feure chooses an independent path. He was mostly nfluenced by Jules Chéret in his posters for the café concert, and assume this is one factor that took him in to a route of painting posters in theoretical performance.

examples of his works

This poster may be one of the commercial projects while Georges de Feure worked in theater designs forLe Chat Noircabaret. 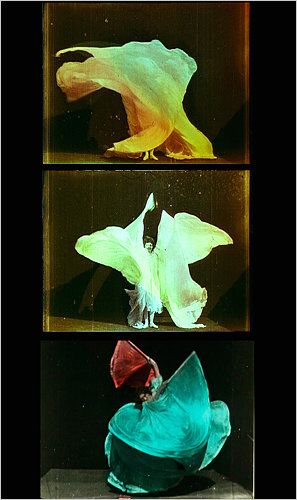 The garment of her costume contains chemical compounds for creating a color gel and the use of chemical salts for luminescent lighting and garments, which created a beautiful effect of change in color throughout the whole performance. The huge silk surface was trying to highlight the movement of the dancer, to let the audience see the formation of movement through time and space.