In 1969, a mysterious middle-aged Latvian doctor turned up in Gerrards Cross with a large collection of tape recordings.

He had, he said, been conducting experiments in communication with the dead, and had established contact with Hitler, Stalin, Mussolini and many other deceased 20th Century statesmen. The recordings – 72,000 of them – contained their voices.

His name was Konstantin Raudive, and he called his technique Electronic Voice Projection, or EVP. 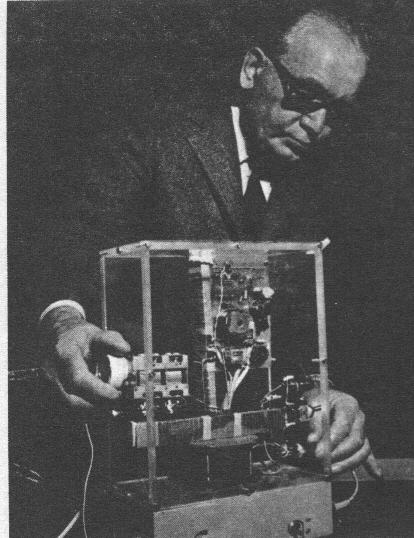 From WFMU’s Beware of the Blog:

“Some people hear crosstalk coming out of their toaster and start cursing their next door neighbor’s cheap portable telephone. Other people (like Thomas Edison) hear the same thing and are convinced that it’s Aunt Millie reaching out from the other side. I count myself in the first category, but in honor of World Hearing Voices Day, here are a batch of Electronic Voice Phenomenon (EVP) recordings from one of the granddaddies of the field, Latvia’s Dr. Konstantin Raudive. These are the MP3s of the flexidisk which accompanied Raudive’s 1971 book, Breakthrough: An Amazing Experiment In Electronic Communication With The Dead:

These MP3s are fairly noisy, but what do you expect – these are ghosts talking here.

In his defense, Edison never claimed to actually record voices of dead people, but he did reportedly try to build a device which accomplished this. He merely theorized that it might be possible. The now burgeoning business of EVP was born in 1959, when a Swedish artist and filmmaker, Friedrich Jorgenson recorded the faint voice of his dead Mom while trying to record bird songs in the Swedish countryside. Raudive took his cue from Jorgenson, and brought academic credentials to the field, having studied with Jung and taught at Sweden’s University of Uppsala (yes, the namesake of WFMU’s former owner).