“In honor of May Day, Ultra-red release the PDF of our latest workbook for militant sound inquiry, “Five Protocols for Organized Listening” (5.8MB). The workbook compiles protocols for collective listening developed by multiple teams of investigators from 2009 to 2011 in cities across North America and Europe. “Five Protocols” is also accompanied by links to related sound objects on the School of Echoes Soundcloud page. Please feel free to download and distribute. We only ask that you send us feedback on your experiments with organized listening and militant sound investigation. 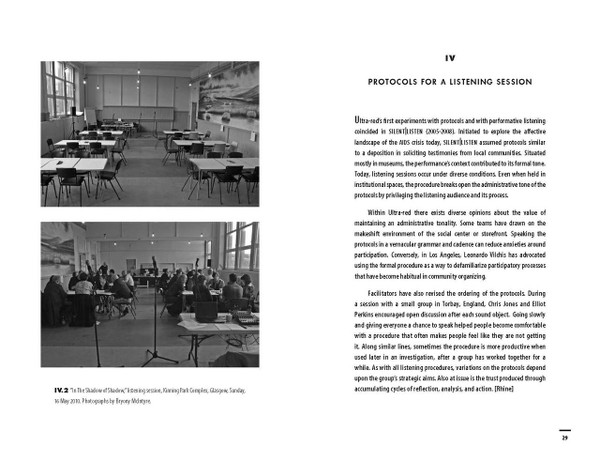 «Recalling the canonical listening experiments of Modernism by John Cage, Cornelius Cardew, Fluxus, Pauline Oliveros, Pierre Schaeffer, R. Murray Schafer, Hildegard Westerkamp, and many others, each had its own protocols. Experimental scores, chance operations, event-scores, and instructions organized the various listening procedures. As conceptualized by the modernist avant-garde, protocols for listening gave priority to transforming auditory perception. Listening, however, stopped short of taking action to transform the world one perceives.

But there exists a counter-discourse of improvised listening linked to collective practice. As creative musician George E. Lewis reminds us, that practice invokes the histories of the struggles for freedom.»

«Listening is never natural. It requires and generates literacy. Since it puts subjects into relation with each other and with the world, listening has the potential to contribute significantly to the constitution of collectivity. Yet the consitutive process far exceeds any listening procedure in and of itself. Organized listening procedures and their protocols can, however, affect transitional moments in political organizing. Over the years Ultra- red have found four moments where listening procedures can make such a contribution:

«We offer this workbook to our readers as an invitation to join us in creating, analyzing, and activating the affective landscape of solidarity. For what is the aim of a militant inquiry but world-making?»

Users of the workbook are welcome to access a series of sound objects at http://soundcloud.com/school-of-echoes.

sound and culturesound as story