-Got Mug Music to sound when grounded and run through terminal- however could not replicate again or tell where the sensor was working. Troubleshot- something seems to be going on in the circuit- signal is lost somewhere, but serial monitor gets data?
– Made a true to size prototype of clay, played with textures for engraving.
-Made a smaller scale model with somewhat better proportions. -Researched materials and new parts needed for next iteration 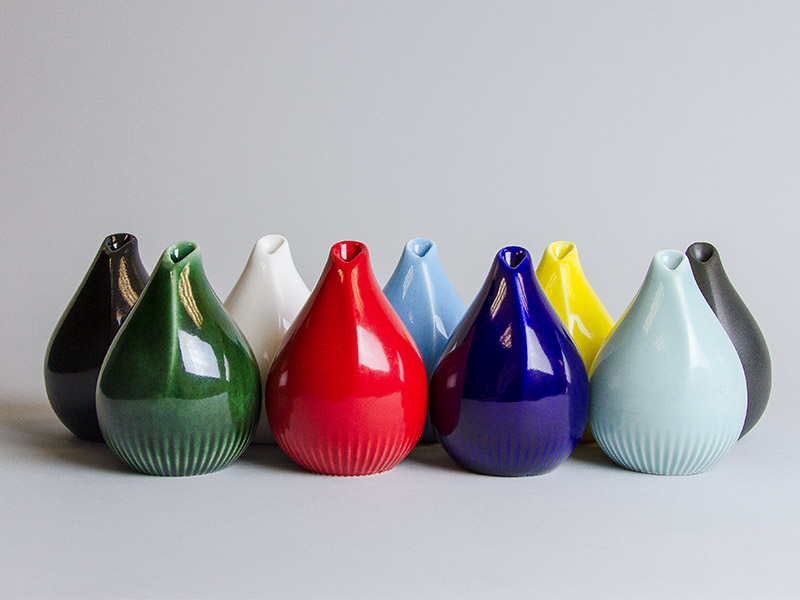 I hope to 3D print a ceramic cup from Shapeways.  The cup will feature a drawer at the base which holds a portable speaker, and so is made of two pieces. The portable speaker is meant to be removed upon use for best audio results. This is where the 3D render file will go once a perfected prototype is 360 scanned:

Logistics & Further Research in that Direction:

DESIGN:
Because the material limits prints to only two parts per piece, I have designed with this in mind. Rounding all edges prevents chip-prone glaze from being laid down thinly in the printing process. Engraving looks especially amazing once glazed because light reflecting off of it creates a strong contrast (except in the white gloss color).

MATERIAL: In order to print in porcelain with Shapeways the max size is 125 x 125 x 200 mm , or roughly 5.5 x 7.5 inches, and the min is 1.5 x 1.25 inches, per part. Bottom comes unglazed, parts / piece must Ideally I would love to print it in gloss white, celadon blue, and Gloss Oribe Green. (Eventually I would love to make this by hand and paint imagery with glazes, but the shape must be predefined so this iteration would take place after the 3D printed porcelain version/s.)

Mug music has had setbacks but I am still intent on achieving a functional iteration. The biggest mistake I have made so far is not documenting it when it worked erratically in class, despite the laptop source being ungrounded. As of Feb 25, my troubleshooting finds the serial port sensing numbers through pin 9, but the unwiring of the pin to ground did nothing to alter the sensor, so I am thinking it may be a circuit/breadboard issue.

-Determine best materials for the job:

1) Speaker: what kind? which? any that can act as a microphone and hold sound data but also play it interchangeably?
2) sound chip// again can the speaker act as a sound data device interchangeably?
3) power source> battery> rechargeable?
-Print PCD Board v1
-Prototype with epoxied paper// or clay fired cup
-360 3D scan or Model 3D render in Maya
3d print prototype at school, upload file to shapeways and see if it passes their file tests for porcelain.